In a time when the past is often forgotten in favor of the latest and greatest, a drive through the Fondren District of Jackson provides a refreshing snapshot into the city of yesteryear. The neighborhood streets, dotted with retro art deco architecture, pays homage to what many refer to as a simpler time. Fondren is also home to one of the city’s most beloved landmarks – Brent’s Drugs.

Pull into the parking lot of the Woodland Hills shopping center and the bright neon-red cursive of the Brent’s Drugs sign is one of the first things to catch the eye. Even though the restaurant and popular community hang out looks like something straight out of American Graffiti or Happy Days, at the time it opened in 1946, it was ahead of its time.

In the early 1940’s, an innovative land developer named Ed Morgan purchased a parcel of land with the intent of building something that was all the rage in California but no one in Mississippi had ever heard of – a shopping center. Dr. Alvin Brent was among Morgan Center’s first tenants when his combination pharmacy and soda fountain opened its doors in 1946. The shopping center, later renamed Woodland Hills, remains the oldest shopping center in Mississippi. 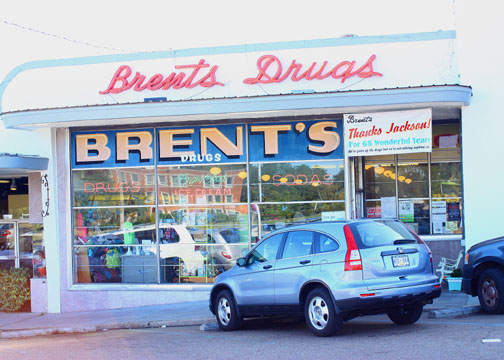 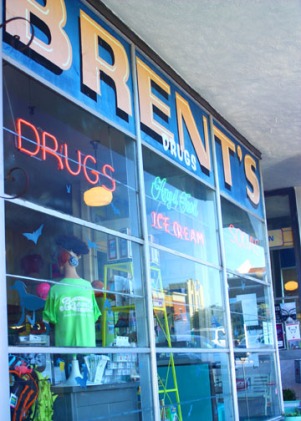 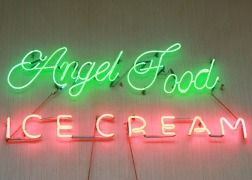 Dr. Brent’s son, Dr. Alvin Brent, Jr., was in the second grade when his father opened the establishment. “I remember thinking it wasn’t a good idea,” he said. “I was worried it wasn’t going to work out.” Brent’s fears were put to ease, however, when the soda fountain quickly became a popular after school hangout.

“You had the Duling School, Bailey Junior High School, and Murrah High School all close by,” Brent explains. “School let out at 3:15 in the afternoon and by 3:30 this place was full. Everyone raced to get here.”

Jerry Q. Tanner, Sr., another long-time patron, remembers how Brent’s became a frequent stop for local politicians looking to get some face time. “During elections, every politician from the Governor to the Lt. Governor would be in here shaking everybody’s hand.”

Brent, Sr., owned and operated Brent’s Drugs for 31 years before selling it to two long-time employees – pharmacists Paul Heflin and Bob Grantham. Grantham would later become sole owner of the establishment, selling it to pharmacist Randy Calvert in 1995. In 2009, the pharmacy-side of the business was sold to national drug-store chain CVS. Suddenly, the long-time neighborhood hangout threatened to close its doors forever.

Fondren resident Brad Reeves remembers the day in 2009 when he got a call from a friend to meet up for dinner. “He asks me if I wanted to buy Brent’s Drugs. I was already practicing law at the time and my initial reaction was ‘No.’” Later, when Reeves found out that the Calvert’s would be shutting down unless they found a buyer, he changed his mind. Reeves purchased the restaurant sans pharmacy in July of 2009.

With the exception of the pharmacy, Brent’s has remained relatively unchanged over the years. In addition to classic decor, the “self-service” order process provides another unique dining experience. Patrons fill out their own menu card, either at their table or at the bar. Selections include hamburgers, sandwiches, French fries, and Southern favorites like pimento cheese. Don’t forget to try one their famous milk shakes. Customers then take their menu card up to the counter and hand it to one of the servers.

In 2011, the small hometown hangout gained national notoriety with its onscreen debut in the film adaption of Kathryn Stockett’s novel, The Help. Because Brent’s Drugs is mentioned in Stockett’s book, Reeves contacted Lex Williams of Inverness who was working with the location coordinator for the film, Steve Mapel.

“He [Steve Mapel] came and looked at the restaurant. He liked what he saw, the only problem was we were a functioning restaurant,” Reeves explains. “We would have to shut down for a few days, but we would be compensated for any lost revenue.”

Reeves agreed and filming took place over one week in September 2010. “The night before they were supposed to start, I walked into the restaurant and it looked like I had just stepped into a time warp,” he recalls. “They did an amazing job with the research and the details. It really looked like you had just stepped back into 1963.”

Ed Swinney, who worked the soda fountain from 1953 – 1968 before leaving to become the first African American police officer for the Jackson Police Department, approved of the authenticity of the movie. “I was really impressed by the individual they chose to play the young man behind the counter in the movie,” Swinney commented. “I don’t know where they found him, but as I watched the film, I thought, ‘That could have been me back then.’”

The Help opened in August 2011 and quickly skyrocketed to the #1 movie in the country. Since then, Brent’s Drugs has gotten visitors from all over the country and even as far away as England and Africa.

“The movie is about to open in Europe, so we recently had a group of European journalists come in who were touring some of the movie locations,” Reeves reveals.

Six decades after opening its doors, Brent’s Drugs celebrated its 65th birthday. The celebration, which took place in October, brought together previous owners, employees and long-time patrons who recalled fond memories and shared their stories with a new generation of enthusiasts over burgers and milkshakes. The world has changed, but Brent’s Drugs continues to stand as a tribute to times gone by.

“There are not many businesses still around after 65 years,” Reeves adds. “This place represents the people that have lived and grown up in Jackson.”