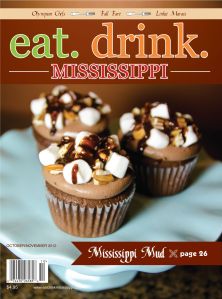 At twelve years old, you may not think Linda Martinez has a “bucket list.”  One thing is for sure, she can mark “meeting the President” off that list.

How did Linda get this once-in-a-lifetime opportunity?  This past summer, she entered the Healthy Lunchtime Challenge sponsored by Epicurious.com, an online food and recipe website owned by Condé Naste.  Kids from all over the country, ages 8-12 years old, were asked to submit a healthy, original recipe that covered all the food groups.  One entrant from each state, three U.S. territories, and the District of Columbia, was chosen to attend the Kids’ “State Dinner” at the White House hosted by First Lady Michelle Obama.  In addition, each winner would have their recipe included in a compilation cookbook.  Linda’s recipe – Mississippi Tacos – was selected out of 1,200 total entries as the winning recipe to represent Mississippi.

The seventh grader at St. Joseph Catholic School has been cooking for a little over a year.  Her parents, Eddie and Kim Martinez of Madison, have made a point to teach both Linda and her older brother Anthony, how to cook for themselves.

“Cooking is an important skill to learn,” said Kim.  “Once a young person gets out in the real world, knowing how to prepare a meal means you are more likely to eat healthy and do not have to spend money to go out to eat all the time.”

Eddie encouraged his daughter to enter the contest.  “We have tried to encourage our kids to participate new opportunities.  They may not win every time, but they should at least give it a try.”

Linda, like most kids, loves tacos.  She decided to lighten up her version by using ground turkey instead of beef and substituting higher calorie Monterey Jack cheese for low-fat feta and mozzarella.

“A lot of kids eat tacos,” she explained.  “It is healthier than a normal taco, but it doesn’t taste any different.  Kids are more likely to eat healthy food if it tastes good.”

Linda was accompanied by her mother to Washington, D.C., where they met up with the other of the 53 winners.  The group got an exclusive tour of the Julia Child exhibit at the Smithsonian, which opens to the public in November.  Later they were treated to a pizza party where each winner was asked to autograph a copy of the cookbook for Mrs. Obama.

The next day during the State Dinner, each child had the opportunity to meet and have their picture taken with the First Lady.

“She was very gracious,” recalled Kim.  “She welcomed us into her home and asked Linda questions about her recipe.”

The dinner began with a few opening remarks from Mrs. Obama.  Recipes from the cookbook were served.  Kim remembers all the press standing by to take pictures and shoot footage.  “It was very nerve-wracking to eat in front of all those cameras and I wondered why they were all still hanging around.”

Suddenly, Mrs. Obama stood up and announced the arrival of very special guest.  Much to everyone’s surprise, in walked the President.

“We were not expecting that,” Kim said.  “It was such a surprise!  He told us how proud he was of all the kids and then shook everybody’s hand.  I was a very proud mama that day.”

Obviously, all the excitement made Linda quite the celebrity among her classmates, who were watching the event live via satellite back home.

“They had lots of questions for me about it.  It was an awesome experience,” she said.  “It was pretty cool to meet the President and The First Lady, but really we were all just normal kids from different states.”

Copies of the Healthy Lunchtime Challenge Cookbook can be downloaded at http://www.epicurious.com/images/pdf/TheEpicuriousHealthyLunchtimeChallengeCookbook.pdf

With adult supervision, cook the turkey in a pan until it is well browned, or roughly 20 minutes. When cooked, turn off the heat on the stove, then have an adult drain the grease from the turkey if there is a lot. Season with cumin, oregano and parsley. Return the pan to the stove.

Place feta cheese on top of the turkey and fold the tortilla in half.

Grab as many carrots from the bag as you want and wash them down good with water.

Put carrots and applesauce on the plate with the taco. If desired, add low fat mozzarella cheese onto the turkey instead of feta cheese.

If desired, add hot sauce or barbecue sauce for taste.