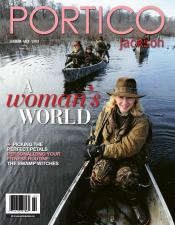 If you ask Gail Pittman what the hardest job in the world is, she will reply, “Being a school teacher.” The artist and business entrepreneur worked as a school teacher for five years with the Jackson Public School System before embarking on a career move that would launch her successful line of home décor. She began at her kitchen table, inspired by a colorful bowl she found in a gift shop.

“At first, I really didn’t like ceramics,” Pittman recalls. “However, I later realized that I really enjoyed painting. So one day I sat at my kitchen table, used a Rubbermaid spice rack as my wheel, and taught myself how to make a bowl. It became my creative outlet. ”

Pittman’s goal was to create pieces that were not only decorative, but also functional. Eventually her pottery caught the eye of friends and family and she began getting requests for orders. When she landed a booth at the Canton Flea Market, Pittman thought, “I have arrived! This is it!” Shortly after, her friend Carol Puckett Daily, founder of The Everyday Gourmet, approached her about selling pieces in her retail store. Pittman soon became a house hold name and her wares are now sold nationwide.

After thirty years in the business, rumors began to circulate late last year that Pittman was retiring. “I knew I wasn’t retiring,” she says, “but there was so much in the works and so many facets that needed to come together before I could reveal what was going on.” Pittman was interested in exploring new techniques, but needed to make some major changes to the logistics side of her business. She closed down her Ridgeland plant and joined into a licensing agreement with Sidco Worldwide in Nashville. The company has production facilities both nationally and abroad and is now responsible for manufacturing and distribution. This frees Pittman up for what she really loves – designing.

“I particularly enjoy this arrangement one, because the owner of Sidco – Tom Kelly – is formerly from Greenville and he shares my belief that our mission should not only be to design products of exceptional quality for the home that inspire hospitality, love, and the creative spirit, but also to make a positive influence on all the lives we touch,” Pittman says.

In May, Pittman opened the Gail Pittman Design Store in Old Towne Center in Ridgeland. The full service retail store features a bridal registry, corporate gifts and showroom that offers not only several new designs but updated versions of some of her best loved patterns and new pieces never before offered.

“This new direction is very exciting,” she says. “I have the opportunity to move into so many different directions and I am having a great time with it. And I love spending time in the store with my customers.” As she reflects back on where the last thirty years have led, she adds, “Everything that happens in life prepares you for what you are supposed do.”