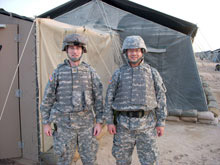 For the average working American, our morning routines may consist of putting on a uniform or a suit and tie and grabbing that first cup of coffee before getting in our cars and driving to work.  However for the last three months, Dr. Richard Clatterbuck’s morning routine consisted of strapping on his army-issued rifle and grabbing a few rounds of ammunition before heading off to surgery.

Clatterbuck, a neurosurgeon at Hattiesburg Clinic and army reservist, spent 90 days on loan to the 332 Expeditionary Medical Group from Task Force 261 Spearhead Medics.  As part of this expeditionary medical group, Clatterbuck was assigned to the Air Force Theatre Hospital in Balad, Iraq.  “A lot of the military medical operations that are happening now are a collaboration between people,” explains Clatterbuck.  “The Air Force doesn’t have enough neurosurgeons and the Air Force hospital needed neurosurgical expertise.  The Army put neurosurgeons there as part of a cooperative function.”

Clatterbuck received the call last summer that he would be going overseas.  Like any solider leaving behind a life and family to serve their country, he had his concerns.    “The first thing I worried about was my wife,” he says.  “And then I worried about having to leave the practice.  My partners would have to pick up the calls and cover my patients.”  However, Clatterbuck says he didn’t spend much time worrying about the dangers he could face when he finally touched down.  “There is certainly some anxiety and concern about going to a combat zone.  But quite honestly, I didn’t lose any sleep worrying about that part.  It’s not the same kind of sacrifice as people who are out there on the frontlines.”

Before Clatterbuck touched down in Iraq, he had to go through 10 days of conditioning and training to prepare him for life in the desert.  His training consisted of becoming familiar with the Iraqi culture in addition to weapons training and how to recognize exploding devices.  After a week of intense training stateside, Clatterbuck was sent to Kuwait for three days for more weapons training before being sent to Iraq.

Clatterbuck describes life in an Iraqi operating room as “brief episodes of sheer terror and adrenaline punctuated by periods of boredom.”  Being fairly close to the battlegrounds, he experienced a few rocket attacks that exploded less than 150 yards from the hospital.  He attributes some of his most memorable experiences to saving the lives of a few severely injured Iraqi children.  “There were a couple of kids who came in with bad head injuries and looked like they were going to die who walked out of the hospital a couple weeks later.”  However, Clatterbuck also adds, “Day in and day out it was just being a neurosurgeon much like being a neurosurgeon over here.  A lot of what I did was very routine kind of stuff and sometimes you were just sitting around waiting for something to happen.”

Overall, Clatterbuck describes the area where he was stationed at as being comfortable.  “I had air conditioning.  I had Armed Forces Network Cable television so I could see football games, basketball games, baseball games, American Idol, whatever was on TV,” he says.  “There was a Burger King there, a Popeye’s Fried Chicken, a Taco Bell, and a Subway. They did what they could to make it as pleasant as it could be.”  But three months away from your family and friends can make even the most seasoned solider long for home.  “I missed seeing grass and water because there was none of that.  We had very few trees and we didn’t have much rain.”   Clatterbuck also longed from some good old Mississippi gulf coast seafood.  “When I first got back to Hattiesburg the very same day I went and had some oysters.  I was dying to have some catfish and have some oysters.”

When asked to sum up his experience Clatterbuck says, “I am very glad I went.  I’m very proud of serving my country.  Medical personnel are something the military desperately needs – there are not enough well-trained surgeons to support the mission.    At the same time, seeing all those people coming in with such severe injuries is not a pleasant experience as a surgeon.  Things are better than they were but it’s still very difficult for the people who live there.  But if they called and told me I needed to go back again I would.”